“Windshield Sunsets” in the Off-Season

Guests often ask, “What do you do in the off season?” The answer is simple: “A lot of the same things we do in season but a little bit different!” Anyone familiar with the Oak Bluffs Inn  knows we enjoy a good beach sunset. The epic sunsets, and rises, Martha’s Vineyard is known for don’t end with the warm weather. A great way to enjoy them when it’s windy or cold in the off-season is from the comfort of your own car. Play music, turn the heat on, and recline your seat. Here are some of the best spots to watch them off season from your car. (P.S. A few things to help are a vehicle with 4×4 or AWD for soft sand, binoculars to view water fowl of the island, and a ‘star app.’ The dark skies of the island provide ample stargazing. Planets like Venus, Mars, Jupiter, and Saturn are easily visible from the island. Also, be on the lookout for ISS, The International Space Station.

Located a short drive from town on The Oak Bluffs side of the drawbridge, take the scenic route along East Chop Drive and see The East Chop Lighthouse. Stop by Jim’s Package Store or Our Market for beverages and snacks. Grab a pizza at Rocco’s or take out seafood can be purchased at The Net Result, a short ride over the drawbridge into Vineyard Haven. (Order ahead to get it fast.) Not only is Eastville is a great spot to watch the sunset but ferry traffic out of Vineyard Haven provides constant entertainment. Also, boat traffic still flows in and out of The Lagoon and the lights of the draw bridge reflected in the water are a sweet view.  The further out area can be soft sand so stay closer to the drawbridge without 4×4. Since it’s close to town and the road, the sky isn’t as dark as some places further out but planets can be clearly visible. Being that it’s close to the road and people walk their dogs there and fish, we will give it “2nd base” in terms of privacy. 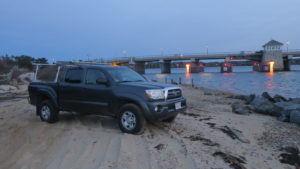 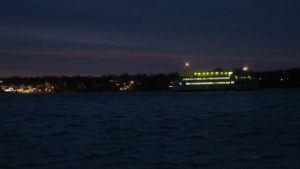 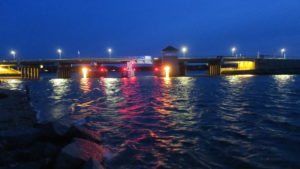 Located in Vineyard Haven down a long dirt road, take Main St. Vineyard Haven out to the West Chop Light House. Then catch Dagget ave. to Herring Creek road to Tashmoo beach. 4×4 isn’t necessary, but helpful, especially at the beach. Food and beverages can be found at the above spots. The flowing water out of Lake Tashmoo adds an extra effect. Tashmoo beach also looks across Vineyard Sound directly across from The Woods Hole Terminal. Ferry traffic can be easily seen as well as The Nobska Light House’s flashing light to the right of the terminal. Being that it is far enough away from town, The Milky Way can be visible on clear nights when the Moon isn’t present. Being that you can see a car’s headlights coming from far away and it’s far from year round housing, we give it “3rd Base” in terms of privacy.

It’s better off-season because of the lack of crowds!! At the end of North Road in Chilmark is the iconic fishing village of Menemsha. Made famous by the Carly Simon song and the home of Quint in the movie Jaws. The Menemsha Fish Market and Larsen’s are open off-season and beverages can be purchased at MV Wine & Spirit at the airport if you’re up-island. A great view across the sound toward The Elizabeth Islands. A little less dark than Tashmoo but still a great star-filled sky. This spot can still be busy off-season so we give it “1st base” in terms of privacy 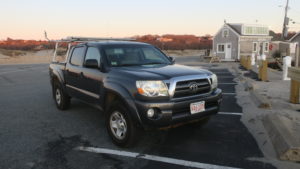 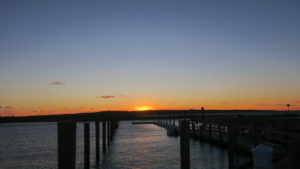 One of the highest points on the island. Also called Radar Hill because of the military radar installation that was up there since the forties. Today there is a Coast Guard communication tower there. We did this one after Menemsha. A great view looking west across the island where The Gay Head Light House flash is visible. The Atlantic Ocean is visible to the south and Vineyard Sound to the northwest. Menemsha pond and Squibnocket pond are also visible.   It is dark and from here the night sky is spectacular. Not giving directions to this one. Some things in life need to be earned. As far as privacy goes, you can see headlights coming but only when they’re close. We will give it a “2nd base” for privacy with the potential to steal third. 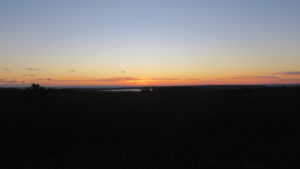 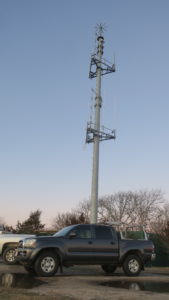 As far as sunrises go, here are some good spots:

Wanna know a secret?
Book direct with the Oak Bluffs Inn and you will always get our best rate.
To book direct, call (508) 693-7171 or book online.

We are on our way home after a 3 night stay at the Inn. We had a wonderful time and most of it thanks to our host Eric. He goes above and beyond for his patrons. Eric helped us maximize our trip by making recommendations and planning our day. I stupidly left my hat at a bar one night and Eric magically tracked it down and returned it to me while getting us to a ferry on time! I would love to stay here again and encourage you to do so. The atmosphere is welcoming and fun! You feel like family by the end of the trip.